The Journey of ZED

The Journey of ZED

ZED, which stands for Zero Energy Development, was one of the TU Delft finalists of the 4TU Impact Challenge and they were the winners! They focus on ‘batteryless’ and wireless IoT devices. But where did the team come from and how did they come to where they are now? We will tell you the story of ZED, a team that wants to make the world of IoT a more sustainable one. We had the pleasure to talk to PhD candidate Suryansh Sharma, associate professor Ranga Rao Venkatesha Prasad (also known as VP) who both work for the faculty of Enigeering, Mathematics and Computer Science (EWI) of the TU Delft, and business intern Josine van der Velde about their journey.

ZED’s journey started a long time ago, all the way back in 2009 when the Air France flight 447 crash happened. That was the first time VP got the idea of making airplanes safer with the help of IoT.

As for the rest of the team: ‘The idea of ‘What will the future of IoT look like?’ in combination with energy harvesting devices has been part of the team members for a long time, even before we ever met and formalised into a team. It has been very prevalent with VP and other researchers’ work’.

When Niels Hokke joined VP’s research in 2017, the idea gained a new impulse, this time with broader spectrum, not only safety related, but what a ‘batteryless’ switch can do for aircrafts in general.

The Airbus ‘Fly your ideas’ competition

And then, in 2019, the Airbus ‘Fly your ideas’ competition came along and with that the opportunity to showcase the research and ideas to the industry. This really kickstarted ZED’s journey.

What started as a simple switch quickly became a more powerful concept of aiding aircrafts to save money as well as reducing infrastructure because there is no wiring needed. The lack of batteries and wiring makes the idea easily scalable by implementing multiple sensors. This is not only because the switches are now cheaper but they also require much less maintenance because there are no batteries that need to be changed every few years.

Suryansh: ‘We could put them in seatbelts for automatic seatbelt detection. We could put the switches in several different places in the aircraft. It was a very simplistic idea but when we put it out there it fit the vision of Airbus very well which resulted in us winning’. 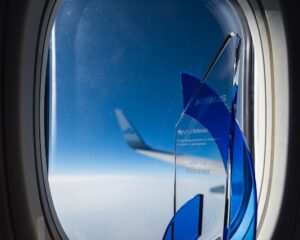 Airbus was keen to explore the ideas further with the team. The first meetings with Airbus engineers have already taken place but unfortunately, COVID struck and the exploration phase has been put on the backburner for now.

Furthermore, winning the competition gave the team the opportunity and resources to explore the possibility of becoming a start-up and to validate their ideas.

COVID brought most of ZED’s activities to a standstill but as luck would have it, Suryansh saw the flyer for preliminary rounds for the 4TU Impact Challenge and the team regained momentum and entered. ZED won the preliminary rounds at the TU Delft and they are now in the national finals which will take place online on November 19th.

Suryansh: ‘When we entered the challenge it was the first time we became ZED. We are using the platform this competition offers us to launch ourself. This competition was a pivoting point in our journey where we stopped focussing on aerospace and broadened our horizon by looking at everybody who can possibly benefit from our technology. We want to translate our research from the lab to the factory floor and that is also how we pitch ourselves: as innovators who bring research experience to the industry. We do not focus on a single use case because we want to envision ourselves as an innovation house who works on extreme IoT. Most of these extreme use cases require us to develop new technology that is currently not available on the market’.

The 4TU impact challenge is definitely not the last we will see from ZED. They have big plans for their future.

Suryansh: ‘We want to make the world battery free. We are now in the process of slowly building our team. When Niels finished his master thesis at TU Delft he started to work full time on establishing the start-up. We also got Josine, an international business and management student, on board because we realised that if you want to be a start-up you need to have a strong business case and strategy. For the time being we are still a student team but we are riding the wave of the first boost and harnessing momentum. Within a span of one year we plan for ZED to officially become a company and to work with our first client.’

ZED wants to make the world a better and more sustainable place. Do you want to hear ZED’s story and support them? Tune in at the online finale of the 4TU Impact Challenge here. You can also find more information about ZED’s challenge and solution here.

The online final of the 4TU Impact Challenge will took place on Thursday 19 November from 3:00 PM – 4:30 PM. Eight finalists from the four technical universities competed against each other. ZED was the winner of the challenge and will accompany the Dutch trade mission to the World Expo in Dubai.